The Mentor: Historic Spots of America 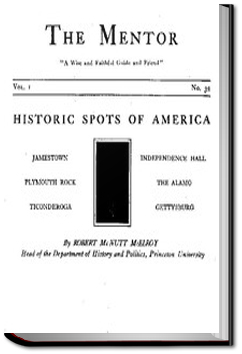 The Mentor: Historic Spots of America by Robert McNutt McElroy

A few years before the settlement of the territory now known as the United States the people of Europe had witnessed a great naval battle in which two kinds of civilizations contended for supremacy. England and Spain were the combatants, and the issue, as we now clearly see, was whether the old idea of monarchy or the new idea of democracy should dominate two continents. Gold from Mexico and Peru had made Spain a great power. Successive royal inheritances had given to her kingly line the control of a large part of Europe. She was the champion of the Church of Rome, and regarded it as her mission to prevent all heretics from planting colonies in the New World. England, on the other hand, was the champion of Protestantism, whose doctrine of the direct responsibility of the individual led logically to democracy in government. England won the battle, destroying Spain’s great Armada, and thus opening the New World to the settlement of men professing Protestant doctrines; for as soon as Spain’s power on the seas was shattered Protestants could plant colonies without danger of having them destroyed by a Spanish man-of-war.