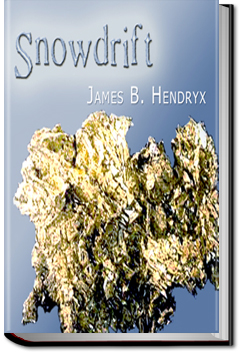 Snowdrift by James B. Hendryx

The story revolves around Carter Brent, an alcoholic and gambler who had struck gold many times in the Yukon, but gambled and drank it away in Dawson; and Snowdrift, the half-breed who had spent her life with a wandering band of Indians in the frozen north country. Snowdrift had been raised by Wananebish, yet never knew who her father was, and yet Wananebish had somehow been able to send her to be schooled at a nearby mission.

The paths of this unlikely pair would cross in the barren lands of the Yukon where Brent had hopes of finding more gold, but it was well known that there was no gold in the region between Dawson and the MacKenzie. But Brent had that certain knack for striking gold, and due to his way of life, also had a certain knack for gambling and drinking it away. Plenty of action follows, while Brent performs his search with little or no money, runs across Snowdrift, and while a band of fellow gamblers who know of his luck follows closely on his trail, he must get his prize back to Dawson.