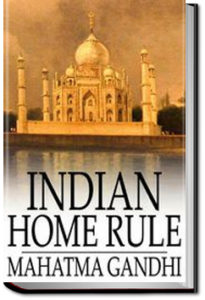 First written in Gandhi’s native language Gujarati, this booklet advocates for Indian non-violent self-rule during the struggle for Indian independence against the British Empire. It is written as a dialogue between two characters. In it, the “Reader” serves as a typical Indian countryman (the targeted audience for Hind Swaraj), who voices common beliefs and arguments of the time concerning Indian independence, while Gandhi, the “Editor,” explains why those arguments are flawed and interjects his own valuable arguments of self-reliance, passive resistance and the Indian identity.

The Gujarati-language publication was banned from publication by the British in India, causing Gandhi to translate it to English himself to evade the British authorities, as well as rally support from English-speaking Indians and international supporters of independence. It is now considered the intellectual blueprint of India’s independence movement.