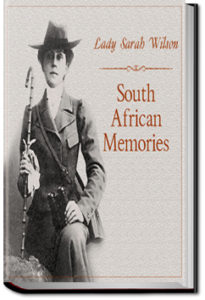 Lady Sarah Isabella Augusta Wilson was the aunt of Winston Spencer Churchill. In 1899 she became the first woman war correspondent when she was recruited to cover the Siege of Mafeking for the Daily Mail during the Boer War. She moved to Mafeking with her husband at the start of the war, where he was aide-de-camp to Colonel Robert Baden-Powell. Baden-Powell asked her to leave Mafeking for her own safety after the Boers threatened to storm the British garrison. This she duly did, and set off on a madcap adventure in the company of her maid, traveling through the South African countryside until she was finally captured by the enemy and returned to the town in exchange for a horse thief being held there. Dwindling food supplies became a constant theme in the stories she sent back to the Mail and the situation seemed hopeless when the garrison was hit by an outbreak of malarial typhoid. In this weakened state the Boers managed to penetrate the outskirts of the town but the British stood firm and repelled the assault. ( Summary by Wikipedia )