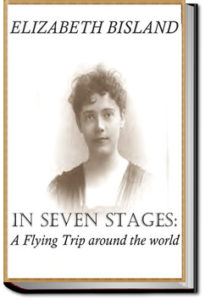 In Seven Stages by Elizabeth Bisland

In November 1889, the New York World announced that it was sending its reporter Nellie Bly around the world, in a bid to beat Phileas Fogg’s fictitious 80-day journey in Jules Verne’s novel Around the World in Eighty Days. Catching wind of this publicity stunt, John Brisben Walker, who had just purchased the three-year-old and still-fledging Cosmopolitan, decided to dispatch Bisland on her own journey.] Six hours after being recruited, Bisland departed westward from New York. Meanwhile, Bly left on a steamer headed to Europe, both on the same day—November 14, 1889. The journeys were keenly followed by the public, though Bly, sponsored by the more sensationalistic and popular New York World (which mainly ignored Bisland), appeared to get more attention than Bisland and the genteel Cosmopolitan, which only published monthly