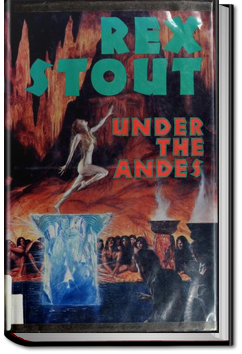 Under the Andes by Rex Stout

Under the Andes was written by Rex Stout years before his creation of the immensely popular Nero Wolfe series of novels, and while perhaps his future writing style is still blossoming, certainly his knack for weaving a fantastic tale of mystery and adventure will have most readers anxious for the next phase of adventure at every turn. The story finds two brothers and a pretty female companion on a journey which eventually takes them to a series of underground caves under the Andes of South America, where they encounter a lost tribe of Incas who have apparently survived hundreds of years oblivious of the outside world. The apparent ‘king’ of the tribe has become infatuated with the fair-skinned female intruder of the group and, well, suffice it to say there’s a lot of action, attempted escapes, heroism, and peculiar interactions between all, reminiscent of H. Rider Haggard with a touch of Edgar Rice Burroughs.