Diary of a U-Boat Commander 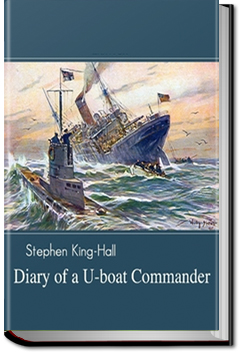 Diary of a U-Boat Commander by Sir Stephen King-Hall

Captain Karl von Schenk of the Kaiser’s Navy is a stereotypical German nobleman – supremely self-confident, touchy about the divisions of class and any infringement on his place. He thinks he is handsome, has a suitably manly physique, an excellent singing voice, and a facility with writing. His wartime service related in his diary is a series of triumphs over harrowing circumstances, bringing his boat back in spite of the best efforts of the Royal Navy to stop him.

His one vulnerability is a young lady he meets on leave in Bruges, Belgium. Although she is the trophy girlfriend of a German colonel who could cause him much harm if he were to find out, von Schenk pursues his Zoe with Teutonic straightforwardness. And both he and the reader are entirely blind-sided by the unexpected thunderclap that puts an end to the sweet affair.

Stephen King-Hall, a Royal Navy officer during the war and writing as “Etienne”, penned this book as if he had simply discovered it on a surrendered submarine. In fact, some editions of the book list the author as “anonymous.” King-Hall’s knowledge of naval affairs lend authority to this yarn of men that go to the sea in ships that sink… on purpose.