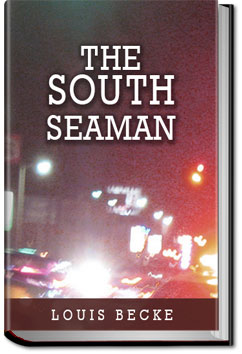 The South Seaman by Louis Becke

On the 22nd of July, 1828, the Sydney South Seaman, Indefatigable, eleven days out from the Port of Conception in Chili, six hundred miles distant from the nearest land—the then almost unknown Paumotu Group, which Cook had well named the Dangerous Archipelago.

Five years before, the brig was named the Calder, and was then commanded by Captain Peter Dillon, a famous officer in the East India Company’s service; his name is interwoven with the sea story of Australia as the commander of the Company’s ship Research, and the discoverer of the relics of the gallant and ill-fated La Perouse, whose ships were wrecked on Vanikoro Island, in the New Hebrides group, in 1788.

When the Colder was under the command of Captain Dillon she was a crack Indian trader to Port Jackson, but newer and smarter vessels drove her out of the trade; and in 1828 she was owned by Mr. John Duncan, an English merchant of Valparaiso, who for this present voyage had loaded her with wheat for Sydney, and sent her to sea under the command of Mr. Joseph Hunter, after changing her name to Indefatigable. This is their story.